Yesterday, Tradd and I went to the Clemson experimental forest, excited that we will find tons of mushrooms since it’s been raining a lot in the upstate. Our dogs enoki and wednesday joined us in the adventure.

There are so many trails in that forest, we see tons of people mountain biking, horse riding, jogging, hiking. it is easy to get lost. NOTE TO SELF: get a map of the Clemson Experimental Trail system. We got lost, and I ended up having to carry the little dog in my backpack for a large part of the trail cause she could not walk anymore. It was cute at the beginning, but once her weight started affecting my back, LOL, I was ready for Tradd to carry me.

The mushrooming was not that prolific, but we did find some edible mushrooms: witch’s butter, beefsteak, puffballs, parasols, astroboletus betula. We really wanted to find a maitake, but no luck, we did find a large stump that was covered with chicken of the woods, but it will have to wait till next time, it was way too old to be picked. But at least we know now where it is ?

Later at home I cleaned and prepared small samples of all the edibles we found.

Everyone that knows me also knows that I am not a big fan of eating boletes. There is just something about them, slimy cap, slimy tubes, and you can usually not cook the sliminess out, at least that is my experience. So I figured, I would slice, and deep fry the mushrooms. I crisped them to death, literally, but they were very tasty after that. Lemony, I thought, they could be used in cooking with seafood, or can be put over salad to replace croutons. Just a thought. The beefsteak mushroom that Tradd found was quite large, and was a young specimen, so I was able to use most of it. when he picked it, the pushroom started secreting reddish juice, it was pretty interesting. I think the reason that it got its name beefsteak, first cause it looks like one, it has a pretty meaty texture to it, and it bleeds red juice. however it tastes very lemony. I prepared it two ways last night: 1)sauteed a piece on olive oil 2)dipped in egg/flour, and fried it. the sauteed pieces were tangy, had a uncooked bacon type of texture, i didn’t like it very much, but the fried ones were delicious. Tradd’s thought that it could be eaten with seafood. It was a little lemony, but not too much. the rest of the mushroom ended up in the dehydrator. Parasols are awesome and very tasty mushrooms. we never find enough of them though. My cousins Andrea and Corinna tell me stories how in germany, they go mushroom hunting with their grandpa in the woods, and they always find tons of parasols everywhere. I wish that was the case here as well. it’s OK though, cause Tradd has cloned the stems, and he will make a bunch of parasol spawn, and then i will make my own parasol garden. anyways back to the cooking: off course i dipped the caps in egg and flour and fried them in a shallow pan. mmmmmmmmmmmmm, they were so delicious, i mean really delicious, way better than a portabella mushroom. if you have to wash the caps though before you cook them, make sure you get all the water out. If you find a puffball, and it is marshmallowy white inside and there is not other structures in there, then it is a good edible puffball. their sizes range from pea size to volleyball size. I never really found any good recipes for a puffball, so I tried some things on my own. By the way, if you see puffballs on the side of a road, leave it be, don’t pick it. They are such great absorbers of all the nasty stuff that comes out of a tailpipe of a car. Also, once it starts yellowing inside, it is not for cooking anymore.

I chopped the shrooms in half, and they smelled so much like parsley. So this is how I cooked them. I soaked them in egg for a while, since they are so spongy, and absorbent. then i rolled them in flour, and fried them in a shallow pan for a while, until they were nice and golden. They actually poofed up in the pan. they ended up looking like pigs in the blanket. I tried one, and its consistency was just like a marshmallow, and it was kinda tasteless. Maybe I should have soaked it longer, and maybe in some peanut butter sauce or something.

I think maybe the puffball mushroom would be better in a dessert recipe.

If anyone has a great puffball recipe, I would love to try it, I dehydrated a bunch of puffballs, they are on standby.

Why would anyone in their right mind want to eat this mushroom, hehe? I am fascinated by it. it is so bright yellow, and gelatinous, and it can cover up a dead tree or a log very quickly. I keep hearing that it is edible but it has no nutritional value. so we tried it last night, hehehehe. again, it is very gelatinous, and a little slimy, so I proceeded to crisp it to death with some salt and cajun spices. i think it would be good for sprinkling it on a salad. I would never put this mushroom in a soup. Tradd said it tasted like calamari. So there you go, it was a fun mushroom tasting. 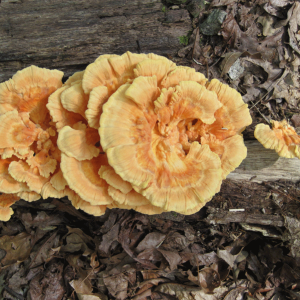